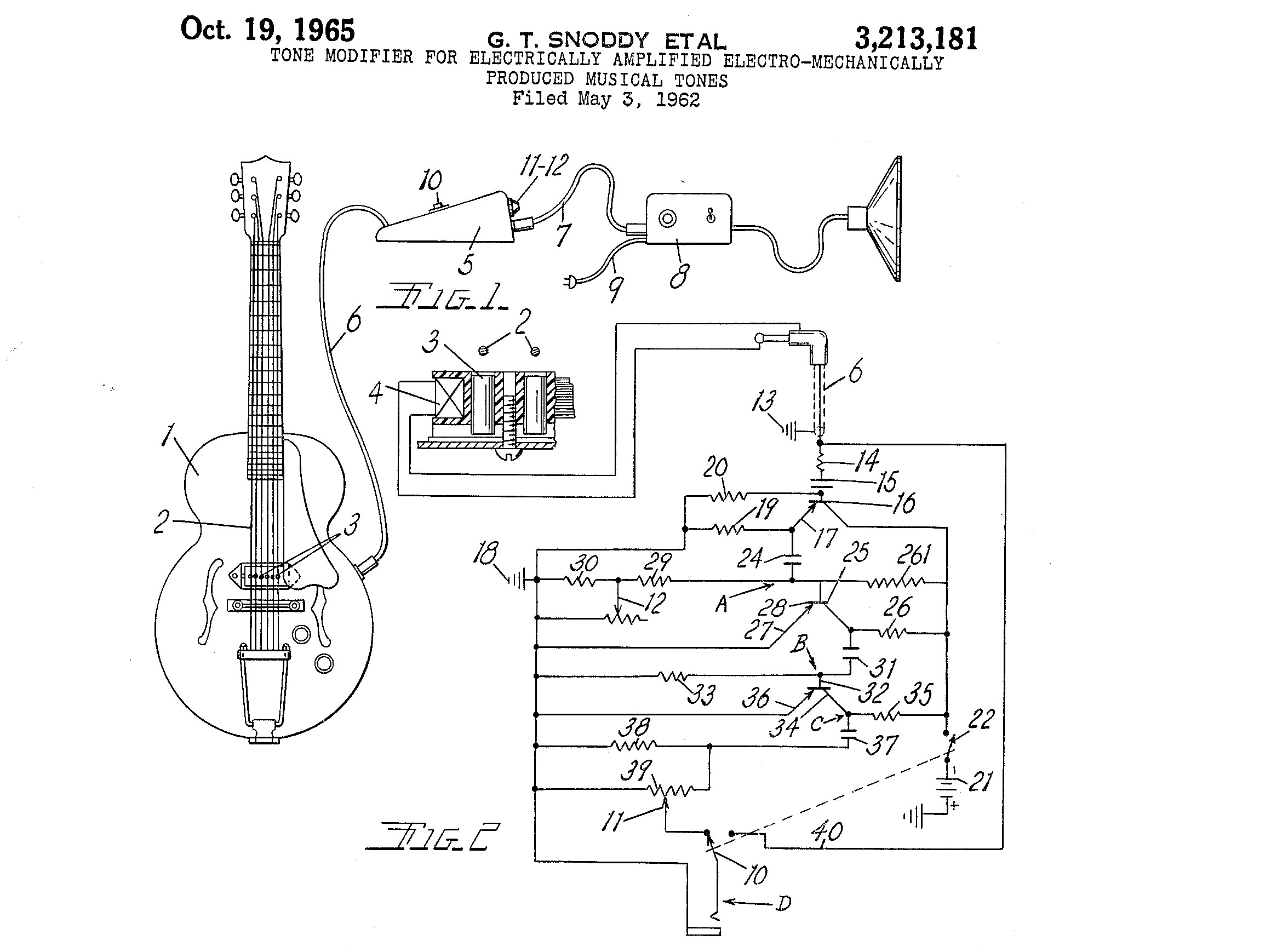 In 2020 I built a software simulation of the first fuzz pedal, the 1962 Maestro Fuzz Tone FZ-1, based on the documentation in Glen Snoddy’s US Patent #3,213,181. The Maestro Fuzz Tone was used by the Rolling Stones on Satisfaction in 1965 and inspird many subsequent fuzz circuits, including the Tone Bender and the Fuzz Face.

Glen Snoddy was a recording engineer at a studio in Nashville. In 1961, the recording console he was using for a Marty Robbins session developed a problem, reportedly a bad transformer, and the bass track ended up “fuzzy”. They decided to keep the track and people were so intrigued with the sound that other artists started booking the studio to use the broken console. Eventually the console died completely and Snoddy got the idea to replicate the sound in a box. He enlisted the help of Revis Hobbs to design the circuit.

My software simulation uses SPICE, an analog circuit simulator. SPICE solves for the voltages in an electronic circuit over time, based on physical models of the components. In this case, I used it to solve for the output voltage of the fuzz circuit as the input voltage is sampled from a clean guitar signal.

Here’s the output for two different settings of the attack potentiometer (labeled 12 in the patent diagram), along with the clean guitar signal that was used as the input:

The challenge was finding a good SPICE model for the transistors in this vintage circuit.

The patent doesn’t suggest a specific part for the pnp bipolar junction transistors (labeled 16, 25, and 32 in the diagram), but we know that the original Maestro Fuzz Tone used RCA 2N270 germanium parts.

The problem is that these germanium devices haven’t been manufactured for a long time and, unlike modern transistors, there are no manufacturer-supplied SPICE models for them.

Hobbyists have attempted to make SPICE models for a few of the more popular germanium transistors, but I couldn’t find anything for the 2N270. I did find an old catalog that listed the AC128 as an equivalent replacement, and several hobbyist-made AC128 SPICE models, but none of them gave the expected results in the circuit.

Although germanium transistors were state-of-the-art at the time, they are terrible by modern standards — high leakage current, very temperature sensitive, etc — and circuits designed around them may not function as expected with “better” components. That seems to be the case with the Snoddy circuit, which requires very leaky transistors to work at all.

I suspected that the AC128 models I was able to find weren’t leaky enough, so I started digging into how SPICE transistor models work with the idea of making my own leakier model.

SPICE uses a Gummel-Poon model for bipolar junction transistors, falling back to a simpler Ebbers-Moll model if certain parameters are missing. Unfortunately, the 2N270 and AC128 datasheets I could find didn’t have enough information to fill in all of the Gummel-Poon parameters. I was stuck.

That’s when I found “Comparison of Germanium Bipolar Junction Transistor Models for Real-Time Circuit Simulation”, Proceedings of the 20th International Conference on Digital Audio Effects, Edinburgh, Scotland, Sept. 2017 by Holmes, Holters, and van Walstijn, in which they analyzed a number of vintage germanium OC44 and AC128 transistors and extracted Gummel-Poon model parameters!

I was able to use their extracted parameters to build a AC128 SPICE model that worked as expected in the simulation, reproducing the sound of the Satisfaction riff, I published my code on github (see below), and that’s where the story ended in 2020.

Then, in April of 2021, Gert Willmann contacted me with news that he had developed his own AC128 model using a different technique: determining the SPICE model parameters through an optimization process that attempted to match characteristics specified in historical datasheets. Even more interesting, he was working on a 2N270 model!

I became an early adopter / collaborator and we even used some of the data in the patent to help drive the optimization process.

The most unexpected result of this collabortation was that, during the optimization process (due to the temperature sensitivity of germanium transistors), we were able to estimate the temperature in the room where Snoddy and Hobbs measured the voltages in their circuit for the patent: 20°C / 68°F. Given the May filing date it’s likely that the measurements were made over the winter, and 68°F is a very plausible winter thermostat setting!

The final 2N270 model works perfectly in the patent simulation and, unlike the previous AC128 model, doesn’t require any biasing adjustments (other than setting the simulation temperature to 20°C).

For more infomation about the Maestro Fuzz Tone and its place in distortion pedal history, check out these videos:

And, finally, if you want more singing and dancing with your pedal history: